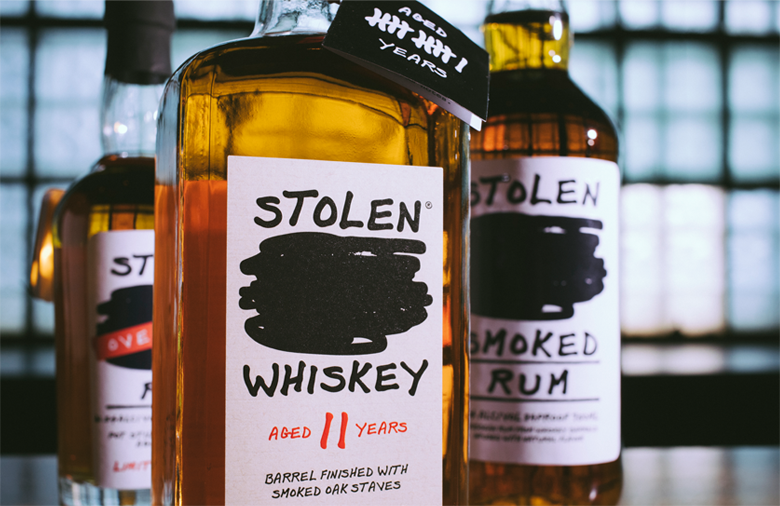 ” STOLEN American Whiskey begins with a mature 11-year-old whiskey. Ever insatiable, STOLEN tapped into industry experts by adding a layer of artistry rooted in extracting staves from ex-whiskey barrels and toasting them in a 360-degree rotation over an oak wood fire. Turning the staves at key points during the toast allowed STOLEN to capture richly nuanced flavors across the entire wood gradient, resulting in a smoky consistency for every barrel stave. To impart these fire roasted notes into the whiskey, STOLEN employs a secondary, barrel-finishing process where “the juice” is continually analyzed for taste and nosed for aroma until it peaks in boldness resulting in an additional layer of finished flavor complexity that differentiates STOLEN Whiskey from other traditional American whiskies and bourbons. On the nose is a roasted coffee bouquet that enhances dark fruits and lingers through an exceptionally long finish. On the palate, natural flavors of toasted caramel, dark molasses and smoky chocolate mingle. STOLEN Whiskey’s initial buttery mouthfeel ultimately balances out a bold and lasting finish. We start with a column-distilled rum from Trinidad, made from locally sourced sugar cane and molasses. The rum is then aged for up to 2 years in used American oak whiskey barrels. Capturing the essence of a fresh brewed cup of joe, we infuse the rum using re-fractionated Colombian Arabica coffee, wholly distilled from same-day roasted beans. The warm, roasted flavor is complemented by the creamy sweetness and velvety texture of premium Madagascan vanilla beans and Moroccan fenugreek. The rum is rounded off with notes of American hardwood, acquired through a smoking process called pyrolysis—the burning of hardwood in the absence of oxygen. The finished product is a smooth, medium body rum with a generous bouquet. On the palate, the deep profile of coffee, vanilla, warm caramel and dark chocolate mix with lingering notes of charred oak for a long, smooth, smoky finish.” – Stolen Spirits